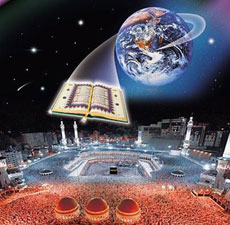 What is Islam? The Message of Islam can be briefly stated in the following three topics: Principles, Forms of Worship and Standards of Behavior.

There is a collection of principles in Islam that one has to accept to be a Muslim. The most important among them are:

(1) - This material world is not the be-all of existence, and this worldly life is only a stage of our existence.

(2) - Man existed even before he was born and will continue to exist after death: He did not create himself but he has been created before he knew himself.

(3) - The inanimate objects around him did not create him because he is a rational being whereas they are not.

(4) - Everything in this universe has bean created from nothingness by one God, Allah the Almighty.

(5) - Allah (God), Glory Be To Him, is the only One Who grants life and causes death. It is He who has created everything, and if He wishes He will destroy and obliterate it.

(6) - Allah (God), Glory Be To Him, has no resemblance with any of His creation. He is the infinitely pre-existent, the eternal, the omnipotent and the omniscient.

(7) - He is fully just and His justice cannot be assessed on the norms of human justice.

(8) - It is He Who has laid down the rules, which we call the laws of nature.

(9) - He has created everything according to a well-defined measure since eternity, consistency and inconsistency that take place in animate and inanimate beings have been clearly defined and demarcated.

(11) - Allah, Glory Be To Him, has created an eternal life beyond this temporary life, wherein the good-doers will be rewarded with a life in paradise and the evil-doers will punished in the Hell-fire.

This God is the One and Only: Allah, He has no partner to be worshipped with Him; no intermediary can take us nearer to Him to plead on our behalf without His permission. Thus, He and only He is to be worshipped in all sincerity and purity.

He has created all the material beings that we can see and feel.He has also created unseen beings, some animate and others inanimate, which we cannot see. Among the unseen beings are the Angels, who have been created for absolute good, and then, the Satans, who have been created as totally evil beings. Apart from these, there is a third category of unseen beings who have in them both the elements of good and evil; they can be virtuous and wicked i.e. the Jinn. And from amongst human beings Allah, Glory be to Him, selects certain people to - whom the Shari'a (Divine Law) is revealed so that they can guide humanity to it. Such people are the Prophets and Messengers.

This Shari'a (Divine Law) is contained in all the books revealed from the Heavens. Every successive book abrogates or amends the preceding book, and the Noble Qur'an is the last of these books. All the books that preceded it were either distorted or lost and forgotten. Only the Noble Qur'an has remained intact.

The last of these Prophets is Muhammad Ibn 'Abdullah, an Arab of the Quraysh tribe. With him came an end to all the previous Divine Legislations. There is no Prophet after him. Thus, the moment one believes in these principles, he is only to pronounce "There is nothing worthy of worship except Allah, Muhammad is His servant and Messenger" to become a Muslim. This leads us to say that is also requested to perform all the duties enjoined upon him by Islam.

They are few in number, easy to perform and do not require much effort or exertion. They are as follows:

First: One has to perform the prescribed Salah (prayer) at Dawn- 2 Rak'as, Midday-4, Later afternoon- 4, After sunset - 3, and at night- 4 Rak'as during which one has communion with his Lord. One asks Him goodness and seeks refuge in Him from His punishment. Before offering Salah (prayer) one has to perform Wudu (washing the face, and the hands up to the elbows, rubbing the head and washing the feet) or take a bath if one is in a state of ritual impurity.

These are the obligatory times of Salah (prayers), the performing of which will not, on the whole, take more than an hour everyday.

There is no particular place or person required for the performance of Salah, neither does it need an intermediary between a Muslim and his Lord.

Second: In the month of Ramadan (Fasting) of every year, Muslims have to change their normal daily routine of meals: breakfast is eaten late at night, lunch is taken after sunset, and during the day they abstain from food and water and sexual intercourse. It is the month of self-purification for every Muslim, body and soul. It is also the month which represents the human desire to do good, to be generous and to reflect the brotherhood of man in the material life.

Third: a Muslim has to render 2.5% of his wealth as Zakah (Charity) to the poor and needy. He has to do this yearly whenever a certain amount of saved money remained with him after his own needs and those of his family have been met. This financial support comes as a great source of comfort to the poor, the sick and the needy. It thus helps to alleviate poverty and to establish a form of social security.

Fourth: Islam has devised certain periodical gatherings for Muslims. Every day they get together five times in order to offer Salah (prayer) in congregation. This gathering is similar to a quarter meeting, which is held five times a day like school teaching hours. That is the congregational Salah (prayer) through which Muslims can reap the reward of virtue.

There is no disruption of work for anyone, whatever be his/her career. Those who miss the congregation, can offer Salah (prayers) at home even though they will deprive themselves of the reward of performing Salah (prayer) in congregation.

Then, there is the weekly congregation on Fridays for Jum'ah Salah (prayer). It lasts less than one hour and it is compulsory for all adult male Muslims to attend.

Besides the above, there are mass congregations held twice a year on the occasion of the Two Eids (Religious Festivals). Attendance is not compulsory and they last less than an hour.

Fifth: There is the annual world congregation, in Makkah, known as Hajj (Pilgrimage). It is a ind of mammoth public gathering, held once a year in a certain place and time. This congregation, in fact, provides guidance in all aspects: spiritual, physical and intellectual. A Muslim is required to partake in it only once in his lifetime, if he can afford it.

These are the most important acts of 'Ibadah (worship) enjoined upon every Muslim, male or female.

Apart from the above, abstention from certain action is also considered as 'Ibadah (worship). These are actions which are deplored by all sensible people and condemned as evil actions. They are acts such as killing without a valid reason, encroachment and aggression on others; all forms of injustice, all intoxicants which affect the brain; Zina (adultery and fornication), since it destroys honor and dignity and violates the sanctioned forms of blood relationship; Riba (usury), utterance of lies, cheating, betrayal and deserting military service which seeks to uphold the cause of Allah (God); and above all, disobedience to one's parents, making a false oath and producing false witness. These are some of the vile deeds that are condemned by all sensible persons.
However, if a Muslim fails to do some of his duties some actions that are not permissible, and then, repents and seeks pardon from Allah (God), verily He will pardon him. Even if he does not repent, he shall still be considered a Muslim - but a disobedient one who may be punished in the Next world. This punishment will, however, be only temporary and will not be equal to that of Kafir (disbeliever).

The Sweetness of Faith

The Beloved Prophet (Blessings and peace of Allah be upon him) has summed up the characteristics of the true Muslim in one eloquent sentence which states the essence of faith and action in a nutshell: "You should worship Allah (God) as though you see Him; for though you do not see Him, He sees you". This is the essence of Islam. It enjoins upon every Muslim to be God-conscious in all his actions, seen or unseen, serious or non-serious. Verily Allah (God), Glory be to him! is watching us constantly and is aware of our every move. Therefore, no one who is God-conscious will embark on any act of disobedience, nor will he despair because he will realize that Allah (God) is with him. Thus, a person who is fortified with such a consciousness will not cringe for help from anybody, because he will ask of Allah (God) what he needs. And if a person commits an act of disobedience to Allah (God) - and every human is subject to sin - he shall repent for his action and Allah (God) will pardon him.