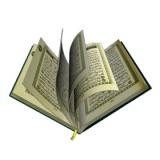 "And We said to Adam, “Dwell you with your spouse in Paradise and eat freely whatever you wish of its fruit, but do not come near this one tree, lest you would be wrongdoers.” (Quran 2:35)

The story starts from here: “When We said to the angels, ‘Prostrate yourselves before Adam’, they did so.” (Quran 2:34) This is undoubtedly the highest accolade bestowed upon man.

For, despite the fact that he would commit corruption on earth and shed blood, he was elevated above the angels, endowed with the secrets of knowledge, and given a free and independent will to choose his destiny. Man’s dual nature, his ability to determine his own course of action, and the trust he carries to pursue God’s guidance by his own means are all aspects of the high esteem in which he is held.

The angels prostrated themselves before Adam in obedience to God’s command, “except for Iblīs (Satan) who refused, swelled in insolence, and was thus an unbeliever” (Quran 2:34) Here we see evil manifested in Satan’s behaviour as he disobeys God Almighty, vainly refuses to recognize honour where it is due, persists in his error and closes his mind to the truth.

The general drift of the narration suggests that Iblīs was not one of the angels; rather, he was with them. For, had he been an angel, he would not have disobeyed God, since the angels’ foremost characteristic is that they “do not disobey God in whatever He commands them and always do what they are bidden.” (Quran 66:6) The fact that the Arabic construction here makes an exception in relation to Iblīs does not mean that he is, or was, one of the angles. The exception is justified on the basis that he was with the angles. This is perfectly acceptable in Arabic, which allows the construction “the whole clan arrived but not Aĥmad” without implying that Aĥmad is a member of the clan.

Furthermore, the Qur’ān specifically identifies Iblīs as belonging to another type of extra-terrestrial creatures, the jinn, who are created out of fire, eliminating the idea that he was, at any time, an angel. (See 15: 27, 18: 50, and 55: 15) The battle lines are drawn, and the long struggle commences between Iblīs, the epitome of evil, and man, God’s vicegerent on earth.

This battle is fought within man’s own conscience. Its outcome will be in man’s favour as long as he exercises his will and remains faithful to his covenant with God. Evil will triumph only if man succumbs to his own desires and alienates himself from his Lord.

"And We said to Adam, “Dwell you with your spouse in Paradise and eat freely whatever you wish of its fruit, but do not come near this one tree, lest you would be wrongdoers.” (Quran 2:35)

They had been allowed access to all the fruits of Paradise with the exception of one tree. That tree may be seen as a symbol of the things forbidden to man on earth, without which there would be no freewill for him to exercise. Man would have been indistinguishable from animals, acting on mere instinct. Without forbidden things, there would be no way of testing man’s willpower and resolve in fulfilling his covenant with God. The human will is the deciding factor, and those who do not exercise their will, despite their human form, belong with animals and irrational creatures.

“But Satan lured them away from it [Paradise] and thus caused them to be ousted from where they had been.” (Quran 2:36)So graphic and expressive is the Arabic word, azallahumā, used here to express the act of luring away. We almost visualise the scene of Adam and Eve being tempted and manoeuvred so that they slip and fall out of Paradise.

Thus the test is over. Adam forgot his covenant and yielded to temptation, invoking God’s inevitable judgement that they should be sent down to earth. “We said, ‘Get you down. You shall be enemies to one another. On earth you shall have an abode and sustenance, for a while.” (Quran 2:36) This was the signal for the battle between man and Satan to commence and continue until the end of time.

But Adam, by virtue of his basically good and sound human nature, was awakened to his oversight and was saved by God’s boundless mercy, which is always close at hand for the repentant to seek. “Thereupon Adam received from his Lord certain words, and He accepted his repentance; for He alone is the One who accepts repentance, the Merciful.” (Quran 2:37)

God’s final word has been spoken, and His full covenant with Adam and his offspring as His vicegerents on earth has been sealed and brought into effect. This covenant outlines the conditions that bring mankind prosperity and those that lead people to ruin. “We said, ‘You shall all descend from it [Paradise]. Guidance shall reach you from Me. Those who follow My guidance shall have nothing to fear nor shall they grieve, but those who deny and gainsay Our revelations shall have the fire, wherein they shall abide.’” (Quran 2:38-39)

Thus the battlefield was transferred to its proper location, the planet earth, and the battle was to rage on unabated. From that early moment man was taught how to triumph over evil, and what would bring about his defeat and condemnation. It is now for him to choose how to act.

Source: In the Shade of Quran