Literally, the word “mountain” (Latin Montanus) is described as “a landmass that projects conspicuously above its surroundings and is higher than a hill.”

The Dictionary of Geological Terms defines a mount or a mountain as a high bill (but mount is always used instead of mountain before a proper name). A mountain is also defined as a tract of land considerably elevated above the adjacent country, and is usually found connected in long chains or ranges, but sometimes can be in the form of single, isolated eminences. From the point of view of physical geography, the same dictionary adds that any portion of the Earth’s crust rising considerably above the surrounding surface is described as a mountain. The term is usually applied to heights of more than 610 meters, all beneath that amount being regarded as hills, and when of considerable heights, hillocks. Nevertheless, in the same issue, a hill is defined as “properly restricted to more or less abrupt elevations of less than 305 meters, all altitudes exceeding this being mountains.” 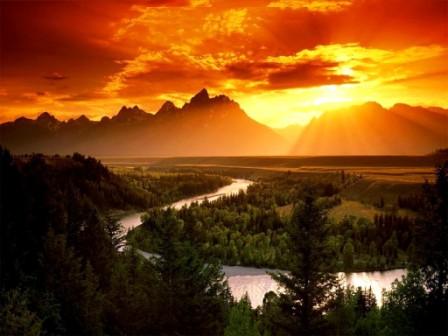 Indeed, in many of the American references, elevations above 300 meters are considered mountains. A mountain range is defined as a single, large mass consisting of a succession of mountains or narrowly spaced mountain ridges, with or without peaks, closely related in position, direction, formation and age. A mountain range is a component part of a mountain system or a mountain chain. The former is defined as “several more or less parallel ranges grouped together," while the latter is described as “a complex, connected series of several, more or less parallel mountain ranges and mountain systems grouped together without regard to similarity of form, structure or origin, but having “a general longitudinal arrangement or well-defined trend . .

” In other words, a mountain range is a series of more or less parallel ridges, all formed from rocks deposited in a single sedimentation basin, while a mountain system is composed of a number of parallel or consecutive ranges, formed from the sediments of different basins, but of approximately the same age of folding.

A mountain chain consists of two or more mountain systems of the same general trend and elevation, while a cordillera is formed of several chains in the same part of a continent.

In “A Dictionary of the Natural Environment," Monkhouse & Small (1978) define the term “mountain” as follows: “A markedly elevated landform, bounded by steep slopes and rising to prominent ridges or individual summit-peaks. There is no specific altitude, but usually taken to be over 600 meters (2000 ft.) in Britain, except where eminences rise abruptly from surrounding lowlands, e.g. Conway M. In such a case, the term Mount is sometimes used . . .

The New Encyclopedia Britannica defines a mountain "as an area of land that is relatively much higher than the land surrounding it” and adds “thus, the so-called hills associated with great ranges such as the Himalayas would be mountains in a less formidable setting."

Similarly, the Encyclopedia Americana defines a mountain as “a portion of the Earth’s surface that rises above the surrounding region” and adds that “Generally, a mountain range decreases in height in stages, with a transition through hills to lower regions called plains. However, in some cases the transition is extremely rapid. Mountains occur worldwide, in both continental and oceanic regions.”

From the above survey, it becomes obvious that all current definitions of mountains, both literal and scientific, restrict themselves to the conspicuous protrusion of such landforms above their surroundings, their high peaks and steep sides, as well as to their presence in either complex ranges, systems, chains, and cordilleras that run more or less parallel to each other or in single prominences. In other words, all current definitions of mountains are only confined to the outer morphology of such landforms, without the slightest notion to their subsurface extensions which have been lately proved to be several times their outward heights. 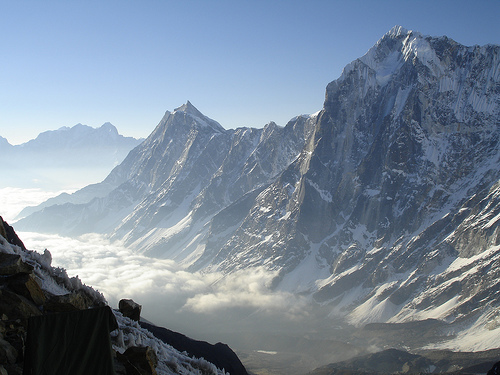 However, the Qur’an consistently describes mountains as stabilizers for the Earth’s surface which hold it firmly lest it should shake with us, and as pickets (or pegs) for the Earth that hold its surface (i.e. the Earth’s lithosphere) down as a means of fixation. So, the Qur’an—in very simple words—described the outward protrusion of mountains on the Earth’s surface, emphasized their great downward extensions within the Earth’s crust, and defined their exact role as pickets and means of fixation for that crust. Such knowledge was revealed more than 12 centuries before man started to wonder whether or not mountains could have roots below its outcropping parts, and before he could realize any value for the existence of mountains on the surface of our globe, a value that is only being currently conceived by a very limited number of specialists in the field of Earth Sciences.

The description of mountains as pegs (or pickets) clearly implies that such striking geomorphologic features are not just the lofty elevations that are seen on the surface of the Earth (as most current glossaries and encyclopedias define them), but their downward extensions in the Earth’s lithosphere is highly emphasized. In as much as most of the picket (or peg) is hidden. in either soil or rock, and its function is to hold one end of the tent to the ground surface, modern Earth Sciences have just proved that mountains possess very deep roots that stabilize lithospheric plates. 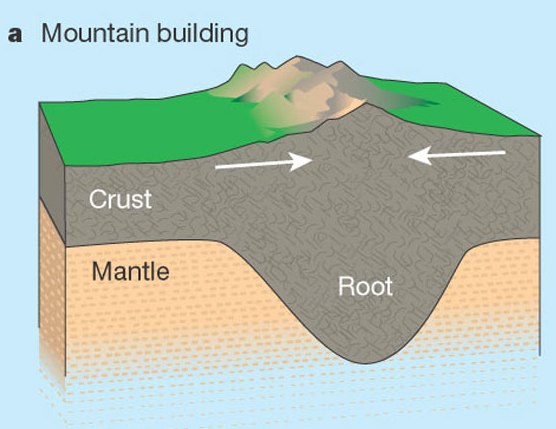 What we see of mountains above the ground surface is nothing but the tops of great masses of rocks that penetrate the lithosphere and float in a more dense substratum (the asthenosphere) as icebergs float in water, with downward extensions below the ground surface that are 10 to 15 times their outward elevations (depending on the average density of the rocks of which the mountain is formed and that of the material in which its root is immersed). A mountain mass with an average specific gravity of 2.7 (that of granite) can sink into a layer of plastic simatic rock (with an average specific gravity of 3.0) until the range is floating with a submerged part (or root) of about nine-tenths, and a protrusion of one tenth its total length. Thus, we can see that by one word (awtad = pegs or pickets) the Glorious Qur’an describes both the outward lofty elevations of mountains, their very deep, downward extensions (to much greater depths than their elevations) and their function as a means of fixation for the whole planet as well as for its continental plates. The term “picket” or “peg” which is used by the Glorious Qur’an to describe mountains, is both literally and scientifically more precise than the term “root” which is currently used to describe the hidden, downward extension of mountains.

The fact that mountains have deep, downward extensions below the ground surface and that their main role is to stabilize the Earth as a planet, and its outer rocky layer (particularly that constitutes continental plates) have only been discerned by the specialists very recently, although scientists have pondered about the possibility of mountains having roots as early as the second half of the nineteenth century. However, the process of formation of such downward extensions as well as their role in halting the sudden, jerky movements of the planet and of its lithospheric plates have only begun to be understood in the framework of modern astronomy and of the very recent concept of plate tectonics (late 1960s and early 1970s). The precedence of the Glorious Qur’an with more than 14 centuries in describing mountains as pegs (or pickets) and in defining their main role as stabilizers for the Earth, lest it should shake with us is a clear testimony that the Qur’an is the work of the Creator, and that Muhammad (PBUH) is His final Messenger.