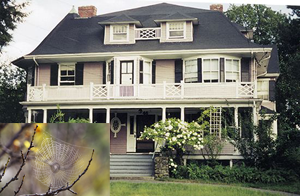 "The likeness of those who choose other patrons than Allah is as the likeness of the spider when she taketh unto herself a house, and lo! the frailest of all houses is the spider's house, if they but knew." (Quran 29:41)

This verse demonstrates in a significant way a bunch of scientific, social and religious facts which are very connected and representing a comprehensive picture of a type of life filled with hatred and instability.

A number of questions arise when one reads this verse, Why the frailest of all houses is is the spider's house?.....Would you attain protection or care if you choose other patrons than Allah?.......What is difference between the spider's house & the Muslim's house?

"…..and lo! the frailest of all houses is the spider's house, if they but knew.":

1.  From the physical point of view

A spider's web is the weakest of all houses.  It is composed of a group of intricate fine silk threads, mostly with large gaps in-between.  However, the spider's silk is one of the strongest substances available on earth, as it can withstand a tension force up to 42000 kg/cm2 which gives it strong stretching abilities.  This feature enables it to trap prey insects without being ruptured. Hence, this explains why Allah (SWT) said in his noble book "… the frailest (weakest) of houses" instead of "the flimsiest threads".  The spider's home remains to be the weakest and frailest of all homes despite its strong threads.1

2. From the spiritual point of view

A spider's house is the most fragile of all houses.  It is deprived of notions of love and mercy; the basis for any happy family.

Male & female: In some species, the female spider kills the male immediately after the fertilization process.  The female devours the male’s body, since the former is larger and fiercer than the latter. 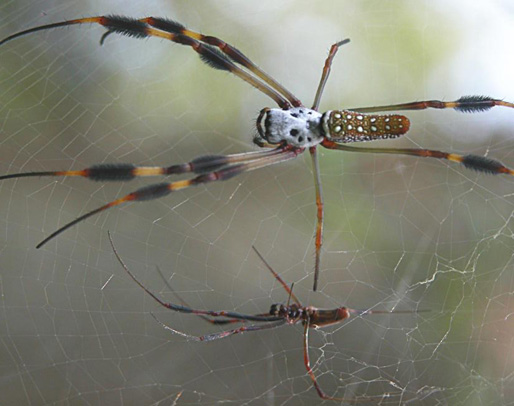 Childeren: In some cases, the female mercilessly eats its offspring.  In other cases, the female dies after the complete fertilization of the eggs that it usually carries in a silk sac.  When the eggs hatch, the spiderlings come out to find themselves in an extremely crowded place.  The siblings then start fighting over food and/or space, until the battle ends with the survival of only a few spiderlings.  Those then shed their skin, break the wall of the egg sac and leave one after another, carrying along unpleasant memories.  When the mother dies, the spiderlings feed on her body.  Afterwards, the spiderlings spread out in the surrounding environment.  Every surviving female starts building its web.  Those who survive go through the same tragic experience all over again, which makes the spider's house the most brutal.  Allah (SWT) has set the spider’s house as an example of fragility and frailty because of the lack of strong family ties and lack of notions of mercy among members of the family.

Such facts were unknown to any human being during the time of the revelation, nor were they known for long centuries to follow.  They were discovered after intensive studies in the field of spider behavior had been carried out by hundreds of scientists over many decades.  The whole thing crystallized only in the last few decades of the twentieth century.  Therefore, Allah (SWT) has concluded the subject ayah by, "…if they knew".

Every one in this world seeks to attain a happy life in which he can feel being protected and separated from any problems and dangers, a kind of life filled with internal and external peace.

And yes, some can achieve success in any field of life, they can gain a lot of money or get a good job, and on the level of societies, a society may achieve material progress and prosperity.

But like the spider male who seeks refuge and enjoyment in his mate's house, he may for a while get that, but at the end he is killed and within the enjoyment time itself, he has no internal peace or stability.

"The likeness of those who choose other patrons than Allah is as the likeness of the spider when she taketh unto herself a house, and lo! the frailest of all houses is the spider's house, if they but knew." (Quran 29:41)

People are thus oblivious of the one power which creates all the little powers, owns, gives, directs and uses them as it pleases. They forget that seeking support and protection from these little powers is just like a spider taking refuge in its web. It remains a small powerless insect that has no power within itself or its flimsy web. The only real support and protection for man is with God. This is the main truth which the Qur’ān takes special care to instill in the minds of believers. It makes their community stronger than all the powers that try to obstruct it.2

The only way to true peace and happiness is not in the spider's house "any temporary material success", but in choosing Allah to be your patron and protector.

The spider's house & The Muslim's house

In the Muslim's house: the husband has a great respect and appreciation when he is young and strong and working to make the living of this family and when he is weak and old, he still has all respect. It is only logical that the one who is naturally the physically and emotionally stronger of the two parents is made head of the household: the male. “…And they (women) have rights (over their husbands) similar (to the rights of their husbands) over them - according to what is equitable.  But men have a degree (of responsibility, etc.) over them…” (Quran 2:228)

In the spider's house: the male is only hosted for a while to make use of him by mating with the female, then he may be killed and eaten by this female or he may run away leaving this deceiving house. This case is like a lot of marriages in which the woman accept to marry someone to take advantage of his wealth or power then she leaves him after taking control.

In the Muslim's house: the mother has its high position that it can not be reached by anyone as she fills the house with compassion and mercy rising up children to be good persons, So when A man once consulted the Prophet Muhammad (PBUH) about taking part in a military campaign. The Prophet asked the man if his mother was still living. When told that she was alive, the Prophet said: "(Then) stay with her, for Paradise is at her feet." (Al-Tirmidhi).

In the Muslim's house: Children are the fruits and flowers of the house, they are surrounded by mercy from parents and love between each others. They are taught to respect and appreciate their parents. "Thy Lord hath decreed, that ye worship none save Him, and (that ye show) kindness to parents. If one of them or both of them attain old age with thee, say not "Fie" unto them nor repulse them, but speak unto them a gracious word. (23) And lower unto them the wing of submission through mercy, and say: My Lord! Have mercy on them both as they did care for me when I was little." (Quran 17:23-24)

In the spider's house: the children remain calm and obedient until they grow up and form their jaws and poisons then they start to fight the adults and kill them, you will see them eating their mother that previously ate the male. This also is like a lot of houses filled with hatred and injustice.

In the Muslim's house: the guest is welcomed and stay in atmosphere of peace and happiness in contrast to the spider's house in which anything gets in the web will live in terror until it is eaten by the spider.

This verse really presents a comprehensive social picture of our lives and it now our turn to choose a life filled with love and mercy or to live in the spider's house.

2- Sayed Qutb, In the shade of Quran, "Surat Al'ankabaut".