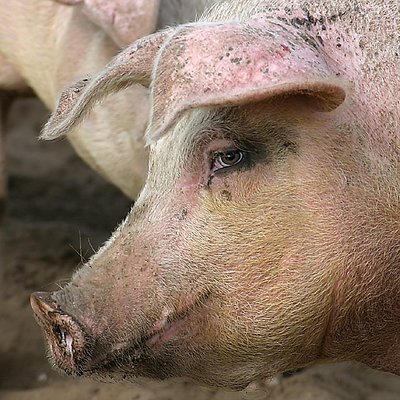 Forbidden to you (for food) are: dead meat, blood, the flesh of swine, and that on which hath been invoked a name other than that of Allah. [Al-Qur’an 5:3]

Again and again Islam proves that it is the most convenient religion which can pick up the world from the swamp of problems in which people live.

After the world had discovered that the solution for the financial crisis always existed in the instructions of Quran which prohibit usury. Even Vatican said “The ethical principles on which Islamic finance is based may bring banks closer to their clients and to the true spirit which should mark every financial service". The world now faces the danger of pandemic caused by Swine flu virus (H1N1) that threats every person on earth, and again the solution is in the Holy Quran.

The H1N1 form of swine flu is one of the descendants of the Spanish flu that caused a devastating pandemic in humans in 1918–1919. The flu virus is perhaps the trickiest known to medical science; it constantly changes form to elude the protective antibodies that the body has developed in response to previous exposures to influenza or to influenza vaccines.

The 2009 swine flu outbreak is an epidemic that began in April 2009 with a new strain of influenza virus. The new strain is commonly called swine flu; the outbreak is believed to have started in March 2009 and was classified as meeting the criteria for the World Health Organization pandemic Phase 5 status on 29 April. Local outbreaks of an influenza-like illness were first detected in three areas of Mexico, but the virus responsible was not clinically identified as a new strain until April 24, 2009. Following the identification, its presence was soon confirmed in various Mexican states and in Mexico City. Within days, isolated cases (and suspected cases) were identified elsewhere in Mexico, the U.S., and several other Northern Hemisphere countries.

The World Health Organization is concerned that this outbreak may become a pandemic, for the following reasons.

New strain: The virus is a new strain of influenza, from which human populations have not been vaccinated or naturally immunized.

Widespread human transmission: The virus infects by human-to-human transmission. Investigations of infected patients indicated no direct contact with swine, such as at a farm or agricultural fair. The strain was later confirmed to have been transmitted between humans.

In contrast, for example, disease transmission in the last severe human outbreak of influenza, the bird flu that peaked in 2006, was determined to be almost entirely from direct contact between humans and birds.

This information confirms that pigs are dirty animals that really threat the entire humanity.

What does Quran Say?

Forbidden to you (for food) are: dead meat, blood, the flesh of swine, and that on which hath been invoked a name other than that of Allah. [Al-Qur’an 5:3] The above verses of the Holy Qur’an are sufficient to satisfy a Muslim as to why pork is forbidden.

World has to know that instructions of the holy Quran is his way to survive the incoming danger, These animals not only can cause this expected pandemic but also, it has very bad habits confirm the wisdom of Allah when he prohibited eating such dirty animals.

Pork has very little muscle building material and contains excess of fat. This fat gets deposited in the vessels and can cause hypertension and heart attack. It is not surprising that over 50% of Americans suffer from hypertension.

Pig is one of the filthiest animals on earth

The pig is one of the filthiest animals on earth. It lives and thrives on muck, faeces and dirt. It is the best scavenger that I know that God has produced. In the villages they don’t have modern toilets and the villagers excrete in the open air. Very often excreta are cleared by pigs.

Some may argue that in advanced countries like Australia, pigs are bred in very clean and hygienic conditions. Even in these hygienic conditions the pigs are kept together in sties. No matter how hard you try to keep them clean they are filthy by nature. They eat and enjoy their own as well as their neighbour’s excreta.

Pig is the most shameless animal

The pig is the most shameless animal on the face of the earth. It is the only animal that invites its friends to have sex with its mate. It feels no jealousy. And among people who consume pork, the practice of wife swapping and other forms of promiscuous behaviour is common.

For all these reasons we as Muslims call for the entire world to abandon breeding these dirty animals and protect humanity from incoming danger.