The holy Qur’an describes the front of the head being lying and sinful. Allah (SWT) says:

Since the front of the head does not speak, how can it be described as being lying? It does not commit sins. How is it then said to be sinful?

Professor Muhammad Yusuf Sukkar dispelled my perplexity while he was talking to me about the function of the brain.

He said: “The function of the portion of the brain that lies in the font of the human head is to control the human behavior.” 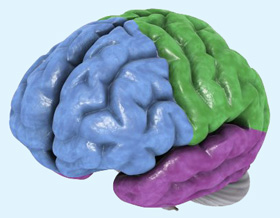 He said: “what have you found?”

I said: “The interpretation of the saying of Allah (SWT):

He said: “Let me consult my books and references.”

Then I discussed the subject with a number of specialized scholars, among whom was Keith L. Moore, who stated that the front of the head is responsible for judging and for directing human behavior. The working organs of the body (e.g. the limbs) are but tools to carry out the decision made in the front of the head. Therefore, the law in some states of the USA punishes major criminals that exhaust the police, by excising the front part of the brain (nasiyah), (for it is the center of control and guidance) whereupon the criminal becomes as mild as a child obeying the orders of anyone.

The Anatomical structure of the upper region of the forehead shows that it consists of one of the bones of the skull, called the fronted bone, which protects one of the lobes of the brain called the frontal lobe, which contains several neural centers in various locations and with various functions.

The prefrontal cortex constitutes the bulk of the frontal lobe of the brain, and its function is involved in the making of one’s personality. It is also considered as a superior center among the centers of concentration, thinking and memory. It plays a significant role in the person’s emotion and it is somehow concerned with initiative and discrimination.

The cortex is situated directly behind the forehead; it is hidden deep in the front of the head. Thus the prefrontal cortex directs some of the human behavior that reflects one’s personality, with respect to being truthful, lying, right, wrong…etc. It also distinguishes between these virtues and vices and urges one to take the initiative whether with good or evil intent.

In a joint research on the scientific miracle of nasiyah by Keith L. Moore and me, presented in an international conference held in Cairo in 1980, Keith L. Moore did not talk about the function of the frontal lobe of the human brain only, but talked about the function of the nasiyah in the brains of various animals. Demonstrating pictures of the fronted lobes of a number of animals, he said: “The comparative anatomical study of human and animal brains shows that the nasiyah has the same function: It is the center of control and guidance in both man and animals that have brains.

Nasiyah is the center of control and guidance in both man and animals that have brains.

His saying drew my attention to the saying of Allah (SWT): “There is not a moving animal but He has the grasp of its nasiyah. Verily, my Lord is on a straight Path.” (Quran 11:56)

I also called to mind some of the traditions of the Prophet (Peace be upon him), such as: “O Allah! I am your servant and the son of your servant and the son of your bondmaid, mynasiyah (front of the head) is in Your Hands…” and: “I seek refuge with you from the evil of everything whosenasiyah is in Your Grasp.” and: “Horses have goodness embedded  in their nasiyahs, till the Day of Resurrection.”

From the meanings of these texts we can conclude that the nasiyah is the center of control and guidance of both human and animal behavior.

Al-Nasiyah: the front of the head.

Most commentators have interpreted this Verse metaphorically, saying that describing the nasiyah being lying and sinful is not to be taken literally; the description is attributed to the owner of the nasiyah and not to the nasiyah itself. Other commentators such as al-Hafiz ibn Kathir left the Verse without comments.

From the sayings of the commentators (May Allah bestow His Mercy on them) we understand that they did not know that the nasiyah is the center of deciding to tell a lie or commit a sin; therefore, they interpreted the Verse metaphorically, while the text literally describes the nasiyah being lying and sinful. They attributed the description to the owner of the nasiyah although the grammatical structure of the utterance does not permit that; otherwise, the structure would have been the genitive construction that is completely different from the adjectival construction.

Other commentators did not comment on the Verse sparing themselves the involvement in something beyond their knowledge and the knowledge of their age.

The Aspects of the Scientific Miracle

Professor Keith L. Moore, illustrating this Scientific Miracle, says: “The information we now know about the function of the brain, was not mentioned throughout history, nor do we find anything about it in the medical books. Should we survey all the medical literature during the time of the Prophet (Peace be upon him) and several centuries thereafter, we would find no mention of the function of the frontal lobe (nasiyah), or an explanation of it or a statement about it except in this Book (the Holy Qur’an), which indicates that such information is of the Knowledge of Allah, the Almighty, Who knows everything, and that Muhammad is Allah’s Messenger.”

§            Prominent commentators had to interpret the explicit text metaphorically because they did not know this secret, in order to safeguard the Qur’an from being accused of lying by people who were ignorant of this fact throughout the past centuries. The fact that the nasiyah is the center of control and guidance in both men and animals is clearly mentioned in Allah’s Book and the Sunnah of his Messenger (Peace be upon him).

Who, then, told Muhammad (Peace be upon him) in particular, of this secret and this fact?

It is the Divine Knowledge that no falsehood can approach from before or behind it. It is a witness from Allah that the Qur’an is from Him and was revealed with His Knowledge.