Sadaqah is also a means of moral learning.  Sadaqah (Charity) is an Ibadah (worship). According to Hadith, Sadaqah is prescribed for every person every day the sun rises.

Hadith is much more explicit. To remove from the road anything, which may cause hurt is called Sadaqah or a charitable deed.  According to another Hadith  "there is a Sadaqah (charity) on every limb with every new sun, and to 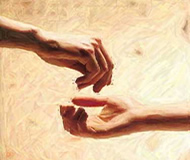 do justice among people is also a charity". On every limb there is a Sadaqah (charity) every day. If a man allows another to ride his animal, it is a charity; or if he helps him to load his animal, this is also a charity. And so is a good word. Every step, which a man takes in going to pray, is a charity; and to show the way is charity. Sadaqah is a very wide term and is used in the Quran to cover all kinds of charity.

Examples of other charitable deeds are; "your salutation to people," "your enjoining what is right and forbidding what is wrong", "refraining from doing evil to any one", of a smile or a glass of water to a thirsty person, or they may even just utter a kindly word and so on. The circle of those toward whom an act of charity may be done is equally wide. To give food to one's wife or one's children is called a charitable deed, while to maintain even one's self is not excluded from the category of charitable deeds.

The Qur'an lays stress on the believers to care for the needy, the orphans, the destitute and the unfortunate members of the society. 'The believers ... are steadfast in prayers, and in whose wealth there is a right acknowledged, for the poor and the destitute. (Qur'an 70:22-24). There is no limit on Sadaqah. Prophet of Allah (SAS) said,  'your smile for your brother is Sadaqah. Your removal of stones, thorns or bones from the paths of people is Sadaqah. Your guidance of a person who is lost is Sadaqah.' (Related by Bukhari from Ibn Hibban's Sahih).

'A Muslim does not plant, or sow anything from which a person, animal or anything eats but it is considered as Sadaqah from him.' (Prophet of Allah (SAS) related by Bukhari.)

Sadaqah-e-jaria (an everlasting Sadaqah): Leaving a contribution in your will in the form of a Sadaqah to some charitable institution is surely a noble decision and will be deemed as a Sadaqah-e-jaria. Sadaqah in the form of wakf is also Sadaqah-e-jaria, i.e. permanent alms. Helping someone to establish himself in business, giving someone a proper education; helping someone to recover from some disease by monetary assistance; to looking after the orphans and the destitute; giving scholarships to students, all such charitable works, come under Sadaqah-e-jaria  - that is why so many centers of social welfare have continued to function in the Muslim community. The reward for giving voluntary alms in secret is seventy times that of giving it publicly (Al-Baydawi, Anwar al-Tanazil, 2/211). Any gift from a Muslim's estate will live on in the lives of other brothers and sisters less fortunate than the donor and his/her heirs.

The scope of Sadaqah is so vast that even the poor who can have nothing tangible to give can offer Sadaqah.   Good conduct is frequently termed Sadaqah in the Hadith. In this extended sense, acts of loving kindness, even greeting another with a cheerful face, is regarded as Sadaqah. In brief, every good deed is Sadaqah.

Sadaqah should start at home

The three basic rules involved with donating funds emphasize charity as a religious function. Firstly, a Muslim must always donate in the name of Allah alone. Secondly, all money donated must be from a legitimate source. Money that has been stolen or earned unethically is annulled in the eyes of Allah. Thirdly, all excess wealth is seen as Allah's ownership in Islam. Therefore it is left up to the individual as to how much they are willing to give back to Him, in the form of charity.

The Qur'an affirms: 'Those who believe, and do deeds of righteousness, and establish regular prayers and regular charity, will have their reward with their Lord: On them shall be no fear, nor shall they grieve' (2:277). Thus charity, on a generic level, plays a major role in Muslim society. One of the key purposes of the religion is grounded in a sense of community, which charity emphasizes.

The Practice of Sadaqah

The Prophet was the most generous of men. He used to give with his own hand. When asked for anything, he never refused. If he had nothing to give, he would borrow from one of his companions and pay him later.

According to the teachings of Islam the giving of Sadaqah serves a number of functions. First and foremost act of Sadaqah is expiation for sins. The believers are asked to give Sadaqah immediately following any transgression (Ihya-e-Ulumuddin, Al-Ghazzali, 1/298). Voluntary alms giving can also compensate for any shortcoming in the past payment of Zakah.   Sadaqah also gives protection against all kinds of evil. Sadaqah wards off affliction in this world, and punishment on Judgment Day. (Ismail Hakki, Tafsir Ruh-alBayan, 1/418). It is therefore recommended to give Sadaqah by night and by day, in secret and in public to seek God's pleasure (Quran, 2:274). The constant giving of a little is said to please God more than the occasional giving of much.