'Lo those who believe and do good deeds and establish Salah and pay Zakah, their reward is with the Sustainer; and no fear shall come on them, nor shall they grieve.' (Qur'an 2:227)

Zakah, is derived from the verb zaka, (which signifies "to thrive," "to be wholesome," "to be pure") means purification. 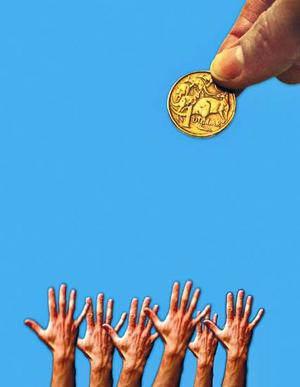 Giving up of a portion of the wealth one may possess in excess of what is needed for sustenance is to "purify" or legalize it so that the remainder may lawfully be used by the alms giver. The law of Zakah is to take from those who have wealth and give it away to those who do not. This rotation of wealth is a way to balance social inequality.

Islam has established this institution to make concern for the poor a permanent and compulsory duty. This means an annual contribution of two and a half percent of one's income to public welfare. The rate on other types of wealth such as agricultural produce and jewelry is more. It is incumbent on minors and adults, males and females, living or dead.

Zakah in spirit is an act of worship while in its external form it is the carrying out of social service. It is thus not just the payment of a tax as it is generally understood but is rather an act of religious significance. Its importance is underscored by the fact that the Qur'an treats it at par with salat (prayer). The Qur'an frequently enjoins the believers 'to perform the worship and pay the Zakah.'

So the test of charity lies not in giving away something we have discarded but the things that we value greatly, something that we love. It is unselfishness that God demands. It may be in any form - one's personal efforts, talents, skill, learning, property or possessions.

Zakah is the type of Muslim charity that is obligatory, as decreed by the Glorious Qur'an. This basic law is seen as a solution to poverty and suffering. The Muslim community is obliged to donate a certain portion of their yearly earnings in the name of Allah, so that the needy and the sick can have a brighter future.

The Qur'an states: 'Of their wealth take alms to purify and sanctify them' (Tauba 9:103). Thus Zakah is looked upon as a means of spiritual purification; therefore, it is an obligation whether or not there are needy members of the community. Zakah acts to remind the Muslim of Allah's gift of wealth bestowed upon them, and of those others not so fortunate.

Zakat forms a part of the whole for a Muslim, in terms of religious observance. Along with prayer and faith, Zakat enables the Muslim to be true in his/her belief of Allah. The law states that 2.5% of a wealthy Muslim's savings must be donated to the cause.

The Qur'an stipulates the specific uses of Zakah within the community: 'The alms are only for the poor and the needy, and for those employed in connection therewith, and for those whose hearts are to be reconciled, and for the freeing of slaves, and for those in debt, and for the cause of Allah, and for the wayfarer' (Al-Tauba 9:60). Above all, Zakah is given in the name of Allah to further His ways amongst the Muslims.

Zakah is a form of worship, rather than a levy.

Zakah (welfare contribution) is obligatory on every Muslim who is sahib-e-nisab. That is, wealth equivalent to the value of three ounces of gold or 21 ounces of silver - at present this value in the USA  $1,000. It is a pillar of Islam and the Qur'an has emphasized it equally as Salah (prayer). The Prophet (SAS) of Allah said: 'If they accept Islam, then inform them that Allah enjoined on them Zakah to be taken from their rich, and given to the poor among them.'

Deducting Zakah from one's earnings is a material acknowledgment of the fact that the actual giver is God. Since the giver is God, the recipient is duty bound to spend it in His cause. Giving Zakah reminds us that our wealth belongs to Allah, and He has blessed us with this wealth as a test. It is important that we should give our Zakah in the way Allah would wish.

Zakah should be paid at the rate of 2.5% on any wealth (cash, savings, investments, gold and silver, etc.) remaining after meeting the expenses for such necessities as food, clothing, housing, vehicles and craft machines, which has been held for over 13 months. The family home is not zakatable. Mortgage is not classed as debt (resale will pay it off).

According to the Qur'an, Zakah is only for (1) the poor and needy, (2) those who collect it (Zakah), (3) for those whose hearts are to be reconciled, (4) for the freedom of those who are captives, (5) those who are in debt, (6) for the cause of Allah (This category allows such funds to be used for the general welfare of the community - for the education of the people, for public works, and for any other need of the Muslim community) and (7) for the wayfarers. As Zakah is compulsory on those who can pay, it is important that it is calculated accurately.