Forget about your Toothbrush! Try Miswak

A Miswak or Siwak is probably an alien thing to the western world. But, it’s a twig which a majority of people from Muslim countries use daily to brush their teeth. Although it might sound outdated to use twigs from trees for cleaning your teeth, studies conducted on the Miswak prove otherwise. Studies have inferred that Miswak is better than toothpaste for preventing gum disease. It is being known as chewing stick in the western world and is being looked upon as a form of alternative medicine. So, let’s analyze this “wonder twig” keeping documented scientific studies as proofs. 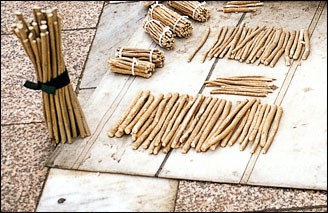 But first of all, why would anyone think of using a tree twig to clean their teeth? The fact is ancient man did not have the facility of a toothbrush and many cultures have used Miswak for oral hygiene. The use of Miswak is well spread in the Muslim population of the world, and is a common entity in Muslim countries. The reason for common use of Miswak by Muslims can be attributed to religious beliefs. The last messenger of Islam used it frequently and also instructed his followers to do the same and hence the practice continues widely in Muslim countries. There are 70 benefits of Miswak as suggested by Islamic Literature and many of these have been scientifically proven and the rest haven’t been studied yet.

You might be wondering what exactly a Miswak is in the first place. The Miswak is obtained from the twigs of the Arak tree (Peelu tree) although a few other trees can also be used to obtain it such as walnut and olive.

A few important benefits of Miswak

Although the 70 supposed benefits of Miswak range widely, the main one we are examining is its effect on oral health. So, let’s throw some light on scientific studies conducted on Miswak.

The Wrigley Company made a study on Miswak which was published in the Journal of Agricultural and Food Chemistry. The study found that mints laced with Miswak extract were 20 times more effective in killing bacteria than ordinary mints. A small testimony to this fact is that after half an hour, the mints laced with Miswak extract killed about 60% of the bacteria where as the ordinary mints managed only 3.6%

In the August issue of Journal of Periodontology (2008) appeared a study conducted by Swedish researchers on Miswak. The study apparently found that suspended Miswak pieces in a petridish (medium for culturing bacteria) were able to kill bacteria that cause periodontal disease with out being in physical contact with the bacteria. The researchers suggested that Miswak might be giving antibiotics as gases trying to explain this phenomenon.

A study which compares toothbrushing and using Miswak (Miswak ing!) can be seen on Pubmed (U.S National Library for Medicine Service). The study concluded that Miswak was more effective than toothbrushing in reducing plaque and gingivitis provided it was used correctly. Similar studies found on the same website and elsewhere vouch for the effectiveness of Miswak over toothbrush.

A study conducted by a group of dentists at King Saud University concluded that using Miswak was at least as good as tooth brushing, if not better. There have been plenty of published studies on Miswak and infact entire books published which study its oral and systemic benefits.

A few related studies and articles on Miswak

·Comparing toothbrushing and Miswak in a population of Sudan

·Study on anti-fungal effect of miswak

·Study on uptake and release of fluoride from Miswak