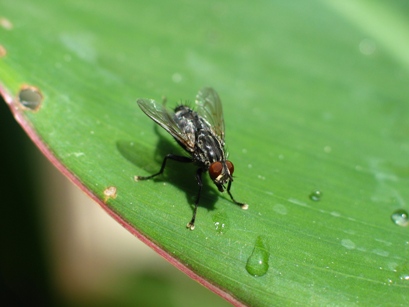 "If a housefly falls into the drink of anyone of you, he should immerse it completely in the liquid, then remove it, for one of its wings has the disease and the other has the cure."

This Hadith means that the fly carries on one of its wings a disease, and on the other a cure from the same disease. When a fly falls into a container (of food or drink), it puts forward the wing carrying the microbe, as a self-defense. Imam Ibn Hajar said in his commentary on the hadith that one of the scholars observed that the fly protects itself with its left wing, so it can be deduced that it carries the cure or the antidote on the right wing. So if the fly is immersed in whatever it falls on, the antidote will destroy the venom or the microbe with the will of Allah.   Some people are not pleased with the idea of immersing a fly in one's food or drink. However, this can be only applied in cases of emergency. When, for example, someone is in a desert, having only little water or drink. Such a person has no choice but to do as the Prophet recommended. Otherwise, he will die from thirst or infection. If someone disdains eating that food or drink, he does not have to do so, but he does not have the right to disclaim the authenticity of the hadith. The hadith is strongly authentic, as it is narrated by Imam al-Bukhari.

Flies are very common on earth. They are almost 87000 species. It has been scientifically proved that they feed on garbage and waste organic matter of the vast numbers of bacteria, viruses and other various microbes and germs.

Bacteria are very small living organisms. They live in billions in one gram of agricultural land and in millions in one drop of saliva. The effect of bacteria on the biological life on earth is unlimited, without it no crops could grow, and without crops there would be no life for man and animals on earth. Most of the bacteria are harmless, but some cause several diseases.

Viruses are, in fact, nucleic acids (either DNA or RNA). Allah the Almighty gave them the ability to enclose themselves by a protein coat, to form separate units called the "virion". The virus particle or the "virion" has the ability to invade living cells (host cell), inciting them to produce more viruses or destroying the tissues of this host cell. That is why viruses are responsible for many diseases, which affect plants, animals and man.

Allah, the Almighty, gave the fly the ability to carry the germ on one wing and its antidote on the other. Otherwise the fly species would have perished by now, exposed to all these germs. However, they still exist in more than 87000 species.

The fly carries the viruses of many diseases, which are consequently transferred to man's food, drink and body. Of these viral diseases are common flu, measles, mumps, chickenpox, warts, yellow fever, infectious liver diseases, some cases of paralysis, some types of cancer, and some chronic diseases of the central nervous system including multiple sclerosis.

Viruses also cause many diseases, which effect cattle, sheep and birds. Some of these diseases are encephalitis, aphthous fever (foot and mouth diseases) and duck plague, which could be transferred to man through the infected animal. Some crops such as potatoes, tomatoes, bananas and sugarcane can also be destroyed by viral infections.

A group of Muslim researchers in Egypt and Saudi Arabia carried several experiments on containers of water, honey and different juices. They exposed them to the flies. Then they immersed some flies in some of these containers. The microscopic examination showed that the liquids in which no flies were immersed were full of bacteria and viruses, while the others where the flies were totally immersed had none.

It was discovered that there are antidotes for pathogens, and that there are various types of bacteria and "Bacteriophages", only in the last decades of the 20th century.

The Prophet PBUH alluded to these 1400 years ago, when humans knew almost nothing of the facts of modern science. But given this type of information with such accuracy, that one wing carries the antidote to the pathogen carried by the other, could only be of the Divine Revelation taught to the Prophet pbuh by Allah the Almighty.