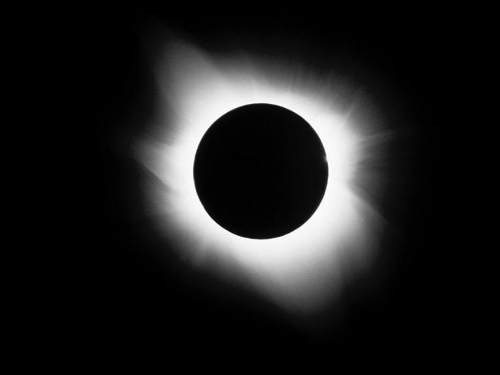 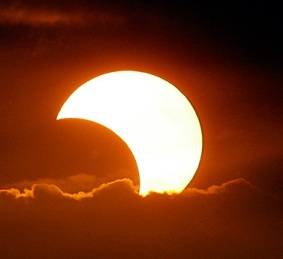 “The sun and the moon do not eclipse because of someone's death but they are two signs amongst the signs of Allah. Whenever you see these eclipses invoke Allah, pray, exclaim, (Allah is Most Great) and give charity.”

'A'ishah (A.S.) narrated that, “There was a solar eclipse during the life-time of Allah's Messenger (PBUH). The Prophet (PBUH) led the people in prayer, and stood up and performed a lengthy recital during the prayer. Then bowed for a long while (made a long Ruku). He stood up again and performed another long recital of the Qur'an, but this time the period of standing (Qiyam) was shorter than the first one. He bowed again for a long time but shorter than the first one (Ruku), then he prostrated and prolonged the prostration. He did the same in the second Rak'ah as he did in the first and then finished the prayer. By then the sun (eclipse) had cleared. He delivered the Khutbah (sermon) and after praising and glorifying Allah, he said:

“The sun and the moon are two signs from amongst Allah’s signs and they do not eclipse because of the death or life of anyone. Therefore, whenever you see an eclipse, remember Allah and say Takbir (exclaim, Allah is Most Great), pray and give Sadaqah (charity).”

A solar eclipse occurs when the moon passes between the sun and the earth, which causes a total or partial solar eclipse. A total eclipse takes place in a limited zone on that part of the earth directly facing the sun, at which the sunlight dims to resemble bright moonlight within a few minutes. To the north and south of this band or zone, a partial eclipse takes place. The part of the sun , which eclipses keep getting smaller as we get away from the total eclipse band towards the direction of the two poles .

The Prophet (PBUH) says in this Hadith:

“The sun and the moon do not eclipse because of the death or life (i.e. the birth) of someone but they are two signs amongst the signs of Allah.”

Science has proven that the moon is followed by a conical shadow, called the umbra, as it blocks the sunrays. In its movement around the earth, the moon's conical shadow passes along with it. At the time of conjunction, which occurs once every lunar month, the moon falls exactly in the middle between the sun and the earth, thus blocking its light totally or partially. Nevertheless, in most of the lunar months, the moon's shadow does not reach the earth, while passing between it and the sun and in such case the sunlight is not blocked. Hence, no eclipse takes place. That is why total solar eclipses are very rare. Sometimes during a solar eclipse the moon falls in the middle between the earth and the sun, and the visible sun narrows to a thin crescent, and the corona appears. At the moment before totality, brilliant points of light, called Baily's beads, flash out.

When the total eclipse takes place, the sky becomes completely dark and the stars become visible in the middle of the day. So in a few minutes, broad daylight turns into what looks like the night, which causes a feeling of panic and depression, not only for human beings, but for all creatures. Birds shelter in their nests, and animals hide in their dens, or get into a state of cautious stillness.

As for the lunar eclipse, it takes place when the earth, being between the sun and the moon, casts a long, conical shadow, called the umbra, with an area of partial shadow called the penumbra around it. This is a phenomenon, which can be observed from all parts of the earth. In most months, the moon passes above or under the umbra, the conical shadow of the earth, and does not enter it. Thus, the lunar eclipse does not take place. During the solar eclipse, the solar energy that reaches the earth decreases and hence the temperature of the earth drops. However, during the lunar eclipse, the solar energy, which reaches the earth increases, causing the temperature of the earth to relatively increase for a few minutes. Since these phenomena are very accurately calculated, the earth is exposed to extreme dangers that only Allah knows how grave they are. That is why the Prophet (PBUH) asked Muslims to invoke Allah, the Almighty, praise Him, exclaim, “Allah is Most Great”, and glorify Him. Moreover, the Prophet asked Muslims to pray and pay charity, praying that Allah will protect the earth and its inhabitants from these dangers.

This is the reason why the Prophet (PBUH) said in other narrations of the same Hadith: “Rush to prayer” and in another narration he said:

“These signs sent by Allah do not occur because of the life or death of somebody, but Allah frightens His worshippers with them. So when you see anything thereof, rush to invoke Allah, pray to Him and ask for His forgiveness.”

One cannot help wondering how the Prophet (PBUH) could attain such accurate scientific facts, more than fourteen hundred years ago, at a time when people were up to their ears in superstitions and myths. It really is an explicit proof of the Prophet's Divine Message.