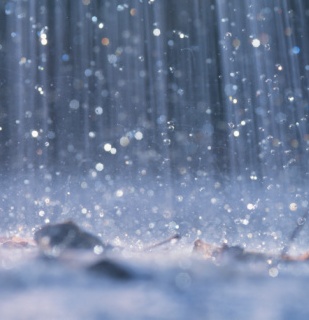 Ibn Mas'ud (AS) narrated that the Prophet (PBUH) said:

“Rainfall in one year is no less (in amount) than that falling in another year.”

This hadith was also reported by al-Hakem in his book “al-Mustadrak”, narrated by ibn 'Abbas (AS),

“Rainfall in one year is no less (in amount) than that falling in another year, it is only that Allah distributes the rain (throughout the earth).”

The first narration of this hadith is Mawquf and related only to Ibn Mas'ud , and the second narration of al-Hakim , is Mawquf , and related only to Ibn 'Abbas (A.S.) , and this incited some hadith scholars to try to classify this hadith as being Da'if (weak) as they could not perceive its scientific inference . Nevertheless this hadith has the precedence in referring to a scientific sign, fourteen hundred years before modern science actually discovered its secret.

After performing extensive studies to estimate the amount of water present on the surface of the earth, it was found to be enormous, as it was estimated to be 1360 million cubic kilometers. Most of this water (97.2%) is in the form of salty water in seas and oceans , while the rest of it (2.8%) forms the fresh water in its three forms (solid , liquid and gas) . 2.15% of the total amount of water on earth is in the form of glacier deposits at the two poles , and on top of their mountains . The rest of the earth's water, which is about 0.65% of the total amount of water on earth, is mostly stored as groundwater in the lithosphere. Next to it, comes the water of fresh water lakes, then the water stored in the form of humidity in the soil of the earth. The remaining amount is water vapor in the gaseous atmosphere, and lastly the water running in rivers and their headstreams.

Therefore, the rate of evaporation from surface water is estimated to be around 434,000 cubic kilometers of water per year, while the rate of water evaporating from the soil is estimated to be almost 50,000cubic kilometers and transpiration from plants 21,000 km3/year. After adding these figures together, we realize that the water cycle between the earth and its atmospheric layer is about 505,000 cubic kilometers per year. Most of this amount of water evaporates from tropical areas, where the average temperature per year reaches 25oC.

When the water evaporates from surface water and soil, it rises up due to its low density, and then air currents drive it to the troposphere; the lowest layer of the earth's gaseous atmosphere and location of all the earth's weather. The troposphere is characterized by a marked decrease in temperature as the altitude increases until it reaches -80oC over the equator. In this cold layer the water vapor , rising from the earth , condenses (with the Will of Allah) and then comes back to the earth in the form of rain , water , snow , hail , or drizzle (whether in the form of dew or fog) .

The water cycle throughout the earth is a miraculous one, which acts as a testimony to the Absolute Ability of the Creator, and the perfection of His Creation. The amount of water is all in all constant and is accurately calculated to fulfill the needs of life on earth. This hydrologic cycle, which alternates between evaporation and rainfall, also purifies the water of the earth, in which billions of individuals, representing different forms of life on earth, live and die. It also helps keep the temperature balance on the surface of the earth, and reduces the intensity of the heat of the sun in summer. This in turn, reduces the difference between the temperature in summer and that in winter, in order to preserve the life on earth in all its different forms.

Man could only realize these critical remarks, at the end of the 20th century, but his knowledge was preceded by the Ahadith of the Prophet (PBUH) in which he said:

“Rainfall in one year is not less (in amount) than that falling in another year; it is only that Allah distributes the rain (over the earth)”.

The source of this scientific fact, which was stated by the seal of the Prophets and Messengers (PBUH) fourteen centuries ago, could only be Divine Revelation. Peace and blessings of Allah be upon him, his family and companions and whoever follows his guidance and his call (Da'wah) till the Day of Judgment.

The source of figures in this material is Windows to the Universe, at http://www.windows.ucar.edu/ at the University Corporation for Atmospheric Research (UCAR).