The scientific approach of the end of the universe asserts that there are three possible scenarios for this dramatic end.

It occurs if the universe continues expanding as it has been.

Over a time scale on the order of 1014 years or less,existing stars burn out, stars cease to be created, and the universe goes dark. Over a much longer time scale in the eras following this, the galaxy evaporates as the stellar remnants comprising it escape into space, and black holes evaporate via Hawking radiation. The universe may eventually achieve thermodynamic equilibrium.

This scenario is possible only if the energy density of dark energy actually increases without limit over time. In this case, the expansion rate of the universe will increase without limit. Gravitationally bound systems, such as clusters of galaxies, galaxies, and ultimately the solar system will be torn apart. Eventually the expansion will be so rapid as to overcome the electromagnetic forces holding molecules and atoms together. In other words, the universe will expand so much that the electromagnetic force holding things together will fall to this expansion, making things fall apart. 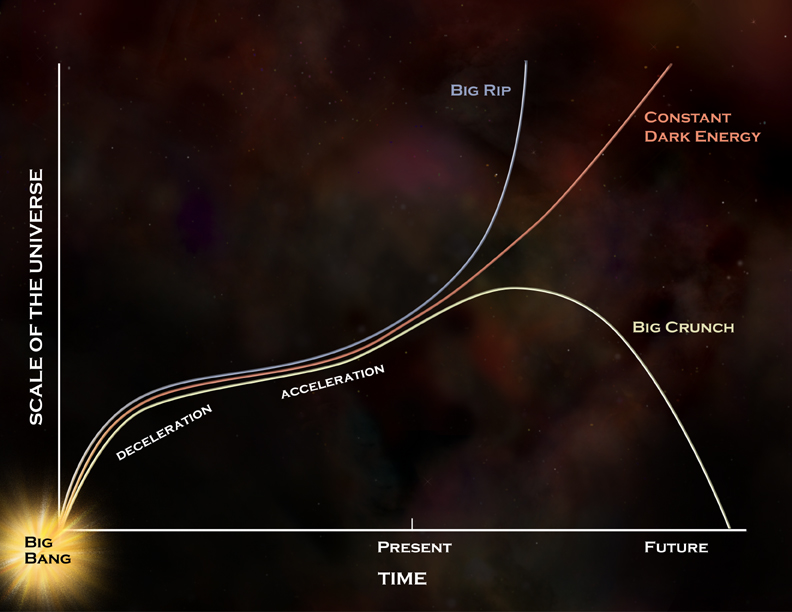 "Tai" Rolling up the heavens

The only theory that may be at high degree of agreement with the Quranic explanation of the fate of the universe is the big crunch theory. Quran asserts that the universe will return back to its original state from which it had been created. The universe will contract on itself as Quran indicates that the heavens will be rolled up like a scroll.

"And (remember) the Day when We shall roll up the heaven like a scroll rolled up for books, As We began the first creation, We shall repeat it, (it is) a promise binding upon Us. Truly, We shall do it." (Quran 21:104)

In another verse Quran indicates the fate of the earth and heavens. The fate of universe exhibits dramatic changes. Ultimately the heavens become convolute (Tai) and the earth is densely gathered (Kabd).

They made not a just estimate of Allâh such as is due to Him. And on the Day of Resurrection the whole of the earth will be grasped by His Hand and the heavens will be rolled up in His Right Hand. Glorified is He, and High is He above all that they associate as partners with Him! (Quran 75:67) 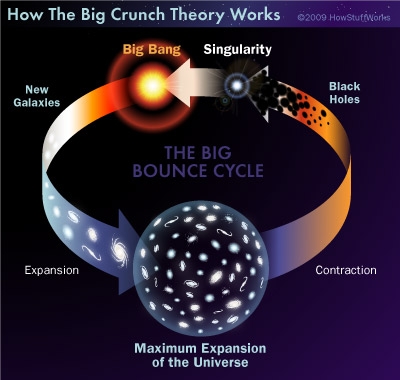 To know that the universe has a beginning and it will absolutely end is undeniable proof that this universe has a creator who is all-mighty and all-powerful. To know that Quran which is a book revealed from 1400 years has mentioned these cosmological facts that have only been discovered in the previous few decades is undeniable proof that Quran is the word of Allah the creator of this vast universe.

This knowledge, which the Qur’an came with, included a precise description of the subtlest secrets at a time when humanity could never have known them, which indicates that its source is Divine, as Allah (SWT) says: “Say: ‘the (Qur’an) was sent down by Him Who knows the secret (that is) in the heavens and the earth: Verily He is Oft-Forgiving, Most Merciful.” (Quran 25:6)

It also indicates that the one to whom the Book was sent down was a Messenger inspired. Allah (SWT) but says the Truth in the Verse:" Soon will We show Our Signs in the Universe and in their own selves, until it becomes manifest to them that this is the Truth. Is it not sufficient that your Lord does witness all things?” (Quran 61:53)