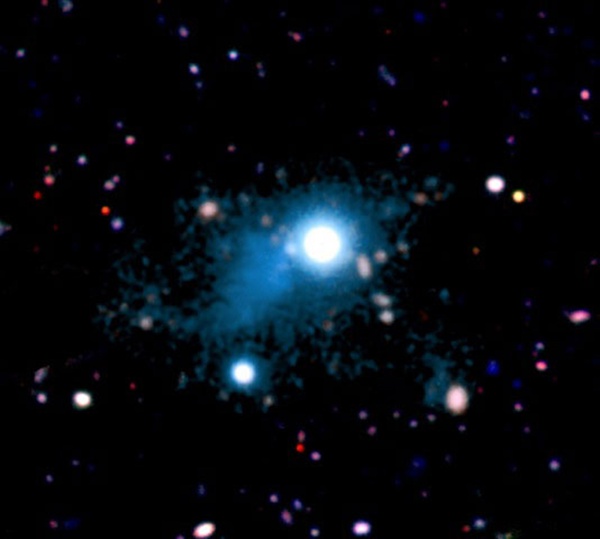 "And verily We have beautified the world's heaven with lamps, and We have made them missiles for the devils, and for them We have prepared the doom of flame" (Quran 67:5)

Astronomers have obtained the first direct images of a portion of the cosmic web by exploiting the fact that a luminous object known as a quasar can act like a natural “cosmic flashlight.”

The observed portion of the cosmic web (colored cyan) with a size of about 2 million light-years, which was discovered in the vicinity of the quasar UM 287 (at the center of the image). The gas is glowing thanks to the same effect that powers fluorescent lamps. This is the first extended image of part of the large-scale cosmic web of gas, which is thought to play a key role in supplying galaxies with the raw material to form new stars.
Supercomputer simulations predict that matter in the universe is distributed in a network of filaments known as the “cosmic web,” where the vast majority of atoms reside as diffuse hydrogen gas. In this picture, galaxies like our Milky Way formed at the nodes of this network, where cool dense gas, the fuel for star formation, funnels in along the intersecting filaments. But direct tests of this model were previously lacking because even at the densest nodes, cosmic web gas is so rarefied that it emits very little light, making it impossible to image even with the world’s largest telescopes.
Now astronomers have obtained the first direct images of a portion of the cosmic web by exploiting the fact that a luminous object known as a quasar can act like a natural “cosmic flashlight.” Quasars constitute a brief phase in the galactic life cycle. Powered by the infall of matter onto a galaxy’s central supermassive black hole, they shine as the most luminous objects in the universe. Because the galaxies hosting quasars should also reside at dense nodes of the web, the quasar can illuminate nearby cosmic web gas, revealing its structure. Under the quasar-flashlight’s intense glare, the gas emits light via the same mechanism at work in an ordinary fluorescent lamp, namely because it is being constantly bombarded with energy. In the case of ordinary lamps, this energy is provided by an electrical current, whereas the cosmic web fluorescence is powered by energy from the quasar radiation.

“The light from the quasar is like a flashlight beam, and in this case, we were lucky that the flashlight is pointing right at the cosmic web, making some of its gas glow,” said Sebastiano Cantalupo from the University of California, Santa Cruz. Using the 10-meter Keck I Telescope at the W. M. Keck Observatory in Hawaii, the researchers were able to capture an image of the fluorescently glowing cosmic web with the help of a custom-made filter. Fluorescent light reaching us from the targeted portion of the cosmic web has a specific characteristic color — and only this color is transmitted by the filter.

The hydrogen gas in intergalactic space has been indirectly studied for decades using a different and much more restricted technique that probes the cosmic web along a single line only — the line joining a distant background quasar with an observer here on Earth. But this method could never reveal the spatial structure of the cosmic web.

“This is the first time anyone has been able to capture an image of the cosmic web, demonstrating its filamentary structure,” said Fabrizio Arrigoni Battaia from the Max Planck Institute for Astronomy in Heidelberg, Germany. The region of the cosmic web visible on the image measures roughly 2 million light-years across.

Such observations can be used to test supercomputer models that simulate the formation of cosmic structures from the Big Bang to the present. Indeed, the new discovery provides evidence that key elements might be missing from current simulations: The amount of cool gas inferred from the image of the cosmic web appears to be substantially larger than predicted.

“If you want to know how galaxies form, you first need to understand their fuel supply, which comes from the cosmic web,” said Joseph Hennawi from the Max Planck Institute for Astronomy. “These new observations are challenging our understanding, as they suggest a large amount of gas is contained in small dense clumps, which is not currently present in our models. Resolving this tension will clearly teach us something very important.”