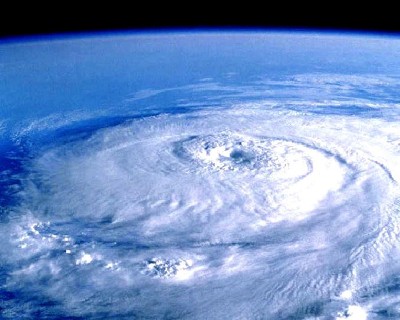 (And it is He Who sends the winds as heralds of glad tidings, going before His Mercy (rain). Till when they have carried a heavy-laden cloud, We drive it to a land that is dead, then We cause water (rain) to descend thereon. Then We produce every kind of fruit therewith. Similarly, We shall raise up the dead, so that you may remember or take heed.) (7:57)

(And We send the winds fertilizing (to fill heavily the clouds with water), then cause the water (rain) to descend from the sky, and We give it to you to drink, and it is not you who are the owners of its stores [i.e. to give water to whom you like or to withhold it from whom you like].) (15:22)

Modern science has affirmed the scientific points mentioned in this verse of the Quran. The winds carry water particles which are rich in salt up into the atmosphere; these particles which are called 'aerosols' function as water traps and form cloud drops by collecting around the water vapor themselves.

The clouds are formed from water vapor that condenses around the salt crystals or dust particles in the air. Because the water droplets in these clouds are very small (with a diameter between 0.01 and 0.02 mm), the clouds are suspended in the air, and spread across the sky.29 Thus, the sky is covered in clouds. The water particles that surround salt crystals and dust particles thicken and form raindrops, so drops that become heavier than the air leave the clouds and start to fall to the ground as rain. Allah says:

(See you not that Allah drives the clouds gently, then joins them together, then makes them into a heap of layers, and you see the rain comes forth from between them; and He sends down from the sky hail (like) mountains, (or there are in the heaven mountains of hail from where He sends down hail), and strikes therewith whom He wills, and averts it from whom He wills. The vivid flash of its (clouds) lightening nearly blinds the sight.) (24:43) 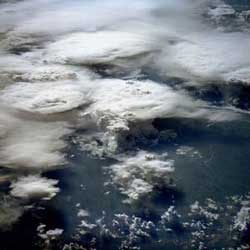 Rain clouds are formed and shaped according to definite systems and stages. The formation stages of cumulonimbus -a type of rain cloud- are: 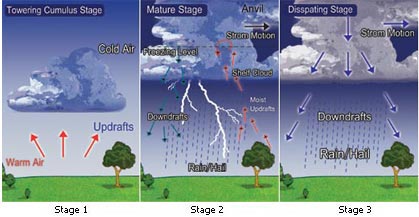 A cloud becomes electrified as hail falls through a region in the cloud of super-cooled droplets and ice crystals. As liquid droplets collide with a hailstone, they freeze on contact and release latent heat. This keeps the surface of the hailstone warmer than that of the surrounding ice crystals. 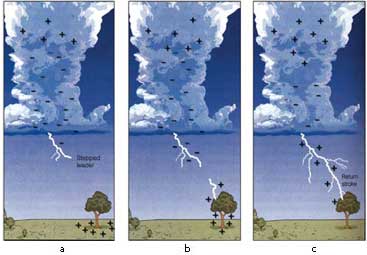 The hail, falls towards the bottom of the cloud, thus the lower part of the cloud becomes negatively charged. These negative charges are then discharged as lightning. We conclude from this that hail is the major factor in producing lightning.30

(And thunder glorifies and praises Him, and so do the angels because of His Awe. He sends the thunderbolts, and therewith He strikes whom He wills, yet they (disbelievers) dispute about Allah. And He is Mighty in strength and Severe in punishment.) (13:13)